For the past 27 years Janet Murphy’s nights have been sleepless and full of worry. Always checking in on son Jesse, and keeping an ear out for his seizures so she can get to him as quickly as possible.

Jesse has epilepsy and has had seizures since he was born. Confined to a wheelchair, the seizures have become worse and more frequent.

When Jesse has a seizure, it’s up to parents Janet and Nev to get to him quickly, make sure he is safe and comfortable and administer nasal drop medication to help bring him out of the seizure. It means they can never really rest.

But thankfully, Janet is now closer to having a restful night and some peace of mind thanks to Santos – who generously donated 22 new sensor mats for Flinders Medical Centre patients with epilepsy.

The mats are placed on the mattress and sound an alarm when seizures occur during the night to alert family or friends to go to them.

“I was told by a doctor many years ago that a seizure would one day kill Jesse and ever since, every time he has one I feel like if I don’t react quickly enough then he is going to die,” Janet recently told us.

“One of my concerns is if I go to sleep and Jesse has a seizure and I don’t know about it, then I can’t get to him.

“I’m a light sleeper and I jump out of bed all the time thinking he is having one - but often he’s not.

“I confided in my husband and a close friend about my fears, and at an appointment my husband told the doctor and she arranged for a mat.”

Janet says knowing an alarm will sound when Jesse has a seizure has lifted the burden.

“I’m just so thankful to Santos and Flinders Foundation for giving us this mat - it’s given me so much peace of mind.”

“When someone has a seizure there’s potential for trauma – they could fall out of the bed and injure themselves, suffocate, have a cardiac problem or if it’s a prolonged seizure then it could cause damage to the brain,” Dr Frasca explains.

“These mats are particularly beneficial because if a family member can recognise they are having a seizure, then they can go to them and give treatment or call for help and that’s very important.” 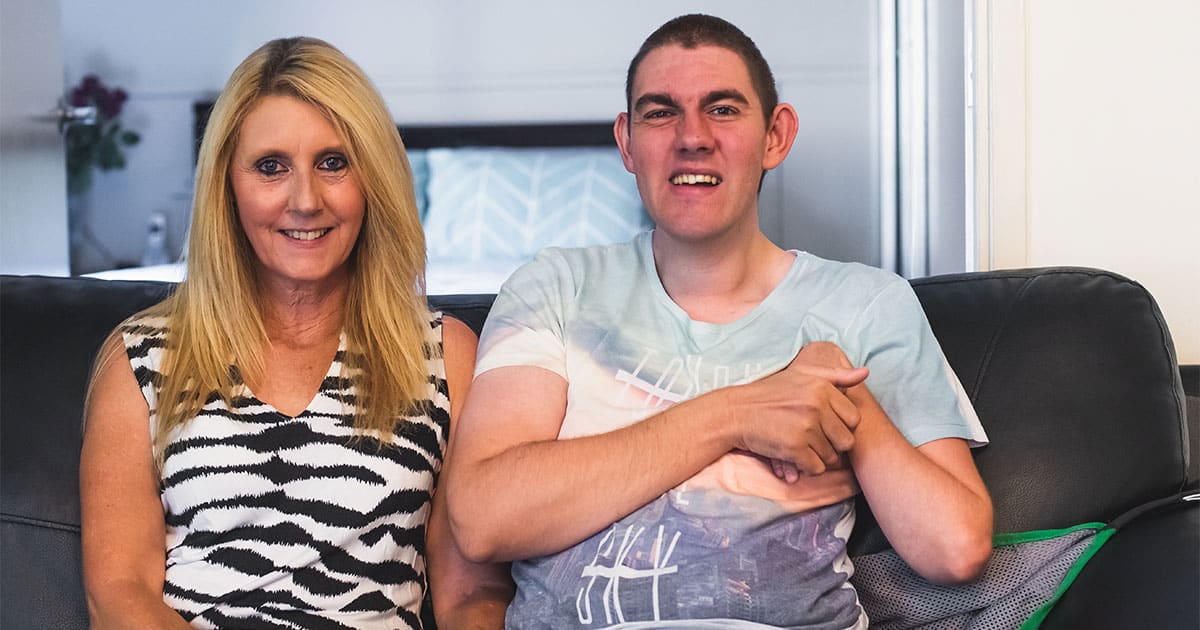 Janet, pictured with son Jesse is now closer to having a restful night and some peace of mind thanks to Santos.

Thanks to your generous support, Flinders’ Professor Michael Shanahan will investigate whether a simple injection could better manage the pain of patients with knee osteoarthritis. Professor Shanahan spoke with Seven News Adelaide about the trial of a nerve block injection near the knee to numb the geniculate nerve which supplies pain fibres to the knee

Thanks to your generous support, Flinders’ Professor Michael Shanahan will investigate whether a simple injection could better manage the pain of patients with knee osteoarthritis

In a partnership between Flinders Foundation and Flinders University, $750,000 in seed grants has been awarded to help researchers advance their knowledge of a variety of illnesses, diseases and social issues.

The next health or medical discovery is a step closer, with thirty-one exciting research projects across the Flinders medical precinct receiving funding in Flinders Foundation’s annual Health Seed Grant Round.

Across the Nullarbor, nearly 3000kms from Flinders, a special group of friends recently gathered for their annual footy match to remember their mate Brad Richards, while also raising $20,000 for cardiac research at Flinders.

Patricia shared her story as part of our recent campaign to raise $120,000 to buy a new Extra Corporeal Membrane Oxygenation (ECMO) machine with the latest technology for the Intensive and Critical Care Unit at Flinders Medical Centre.

Funded by a generous, long-time supporter of Flinders Foundation, the $17,000 bladder scanner allows nurses on Ward 5G to quickly examine the bladder for signs of discomfort, avoiding the need for the patient to be sent to radiology.

Cancer patients at Flinders are receiving faster care at their bedside thanks to new ultrasound equipment.

Take a look at Today Tonight's story about how your generous donations are helping to create a special memento of babies medical journeys in the Flinders Medical Centre Neonatal Unit.

Babies in the Flinders Medical Centre Neonatal Unit now have a special memento of their medical journey with the arrival of a new bead program.

Improving the lives of patients with sleep disorders.

The world-leading Adelaide Institute for Sleep Health has opened! It houses 40 sleep health experts and includes dedicated research and laboratory spaces allowing for a full range of human sleep research.

Improving the lives of patients with sleep disorders.

With your help, Flinders is now home to a new $4 million high-tech sleep research facility.

You did it! Cancer Wellness Centre set to open in October

Over the past two years, the South Australian community has rallied together to raise the $500,000 needed to open a Cancer Wellness Centre on the ground floor of the Flinders Centre for Innovation in Cancer (FCIC) to help ease the burden of cancer on patients and their loved ones.

You did it! Cancer Wellness Centre set to open in October

In just a few short weeks, patients and their families affected by cancer will be closer to receiving the extra support they need. And it’s all thanks to you!

Researchers across the Flinders medical precinct including all Flinders University and Southern Adelaide Local Health Network (SALHN) researchers involved in health and medical research are eligible to apply.

Closer to a cure thanks to Tour de Cure

Set against a picturesque backdrop, the group of 110 cyclists and support crew rode more than 300km over three days from 24-26 May, from Victor Harbor and across to Kangaroo Island aboard SeaLink.

Closer to a cure thanks to Tour de Cure