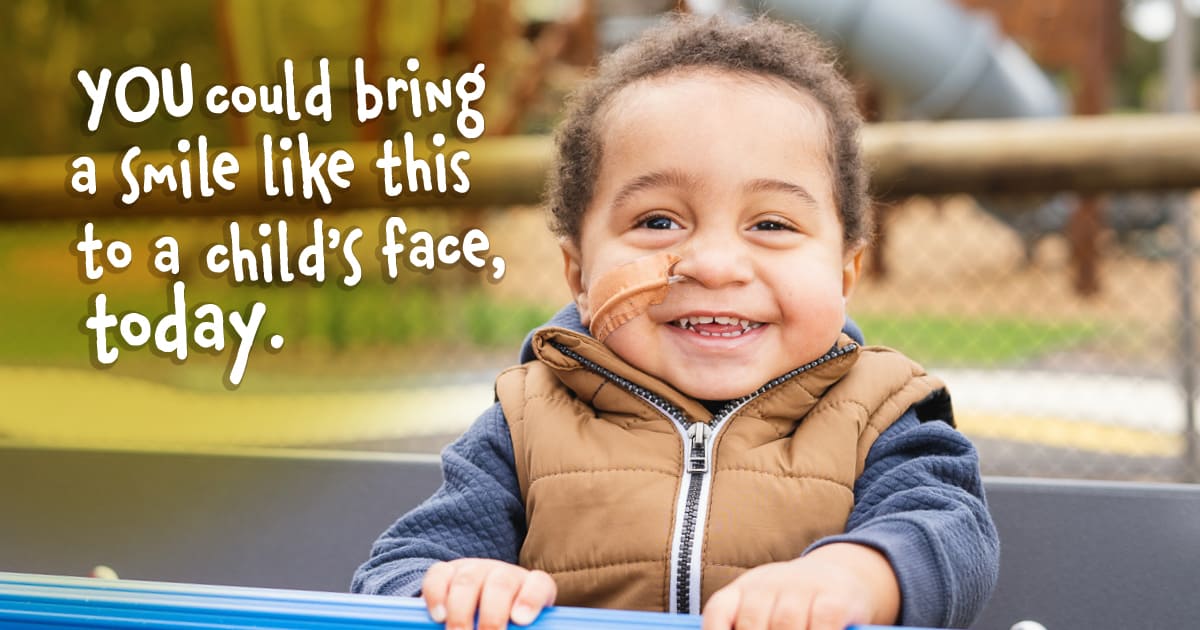 A hospital can be a scary place for a young child. And it is equally distressing for worried parents.

Your gift today will help fund a playground and outdoor space at Flinders Medical Centre, to support young patients to recover quicker and get out of hospital, sooner.

Will you please help grant this Christmas wish today?

Yes! I want to help grant this Christmas wish.

Before he was two, David had already had 28 ambulance rides to hospital. That’s 28 hospital stays away from home. Away from his big sister Lilly. And away from his favourite place - the park.

He was brought by ambulance to Flinders Medical Centre where the skilled doctors and nurses resuscitated him.

His mum has lost count of how many times he has been admitted to hospital since.

At least once a month, David and his mum spend several days together in hospital.

They wait until David is well enough to return home. Until the next time, that is.

Your generous gift will help fund a playground and outdoor space. For the first time, young patients and their families will have a place to go for a moment of distraction, fresh air and enjoyment.

This valuable time outdoors in the fresh air is also beneficial to the health of young patients, speeding up their recovery, to get them home sooner.

Please help grant this Christmas wish and bring a smile to the faces of kids like David. 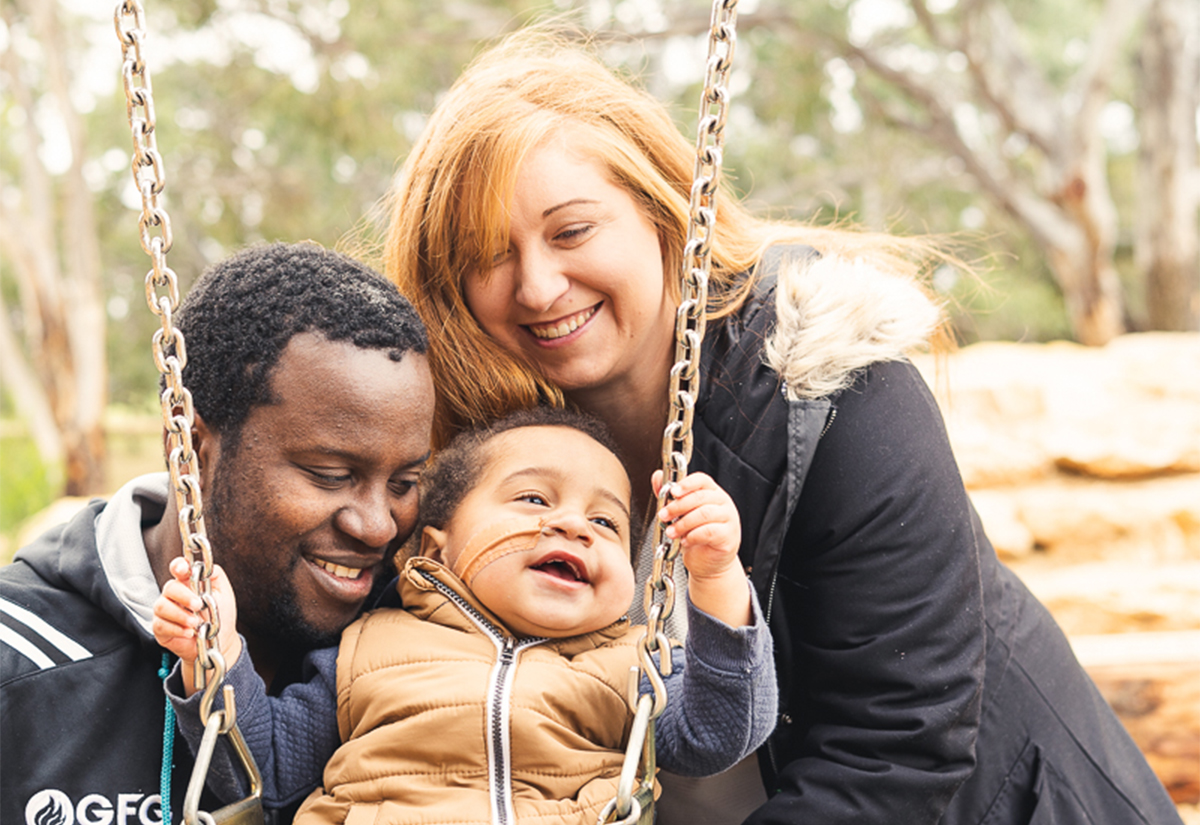 Yes, I will support kids to recover quicker and leave hospital, sooner.

When David was born at Flinders, his parents Chloe and Godfrey, and big sister Lilly, now four, were full of love and proudly took him home. Everything seemed fine.

But a couple of weeks later David was diagnosed with laryngomalacia – a narrow and floppy airway which means he struggles to get air into his lungs.

At the first sign of a virus, or cooler air temperatures, David goes into respiratory distress. He turns blue and is unable to breathe. For Chloe, it means all day, and all night, one eye is always on David.

Despite his condition, and the presence of a nasogastric tube to help with feeding, Chloe says David is a happy, active boy.

He’s obsessed with the movie Cars, and loves nothing more than playing at the park with Lilly.

“We have a playground around the corner, and he loves it. Just the chance to get outside and run. Lilly will grab David’s shoes and put them on for him because the two of them want to get there as quick as they can,” Chloe says.

“His favourite thing at the playground is the stairs – he loves them more than going down the slide itself. He’d climb them all day if he could.”

But when David is in hospital, Lilly misses him terribly.

“They have such a great bond and she wants to come and see him. But she goes a bit stir-crazy and gets bored when she comes to visit. So, it would be very helpful to have somewhere she can go too so that she also feels included when he’s there.”

It’s not just patients like David who will benefit from your gift for an outdoor space and playground.

It’s also their brothers, sisters and parents who ride the roller coaster of caring for a sick child.

Your gift today will help create a playground and outdoor space next to the paediatric ward, so parents and families can stay close by.

Will you please help?

Yes, please use my gift to help build this outdoor space for kids and families

Chloe says it’s so important for families to have a place to go where they can ‘take five’ and look after themselves during these often scary and anxious times.

“It’s extremely hard being there and I don’t ever want to leave David. There was a time that I left him, and he deteriorated…I’m still haunted by that.

“It would be wonderful if there was a place close by to go and sit outside with a cup of coffee and take a few deep breaths while David is having a little nap, but still know I could be back with him in an instant.”

It’s not just patients who will benefit from your gift for an outdoor space and playground.

It’s also their brothers, sisters and parents who ride the roller coaster of caring for a sick child.

We asked some of them what they would like to include in the playground. 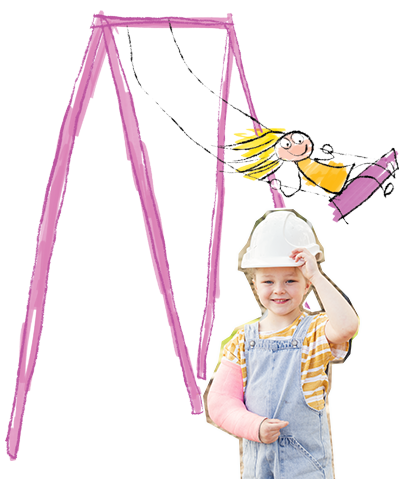 “A merry-go-round… and some monkey bars too.” – seven-year-old Mimi’s wish 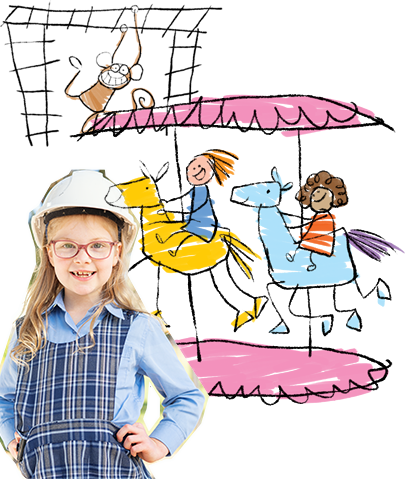 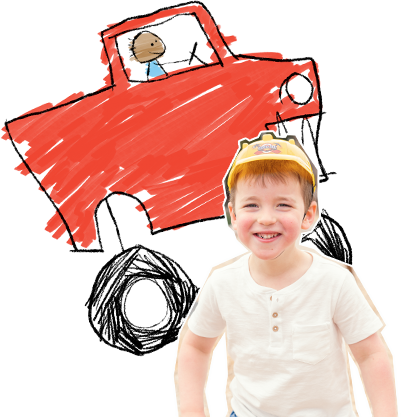 Your gift today will help create a playground and outdoor space next to the paediatric ward, so parents and families can stay close by.

We’ll be honest…we don’t think the grown-up playground designers will be able to accommodate some of these ideas – particularly little Korbin's fabulous idea for a monster truck track - but we do love to see kids using their imagination!

With your help, kids can feel better sooner!

Yes! I want to help grant this Christmas wish.

Each year, young patients and their families visit Flinders Medical Centre to attend close to 50,000 medical appointments in the paediatric clinics.

And about 5,000 children will be admitted to the paediatric ward for injuries and illness, right through to life-threatening conditions.

David’s doctor, Flinders Medical Centre Head of Paediatrics, Dr Matthew Scholar says some fresh air, sunshine and a brief escape from the confines of a hospital room can work wonders for children’s healing.

“Most of the kids we see don’t need to be isolated or confined to a bed when in hospital because they’re not infectious or attached to oxygen or other monitoring,” Dr Scholar explains.

“Play is so important for the mental health and wellbeing of our young people, and an integral part of therapy – particularly for our children with developmental delays.

“So, for those kids, the chance to keep busy, get outside and just act normally is a chance for them not to feel like they’re sick and in hospital.”

Please help us to build a playground and outdoor space at Flinders for sick and injured children and their families? To help them heal not only physically, but mentally too.

Yes, I will donate today because I want to bring a smile to a child’s face

Simply click here to donate now so we can get this exciting and heart-warming project underway as soon as possible.

I’d love to be able to tell the dedicated paediatric staff that thanks to you, we’re well on the way to making this Christmas wish come true.

Thank you so much for your support and working together to prevent, cure and care for thousands of children and their families who receive care at Flinders.